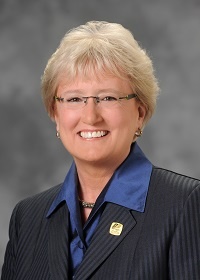 Classic content: One in a series of interviews with Modern Healthcare's Top 25 Women in Healthcare for 2015.

Nancy Schlichting has become known for bold, unconventional leadership during her tenure at the Henry Ford Health System in Detroit, where she’s served as the CEO since 2003. She’s won numerous awards and led major initiatives, like the process that led to Henry Ford winning the prestigious Malcolm Baldrige National Quality Award in 2011.
But the key to great leadership, she says, is developing and nurturing relationships.

“I think you have to understand that every interaction matters,” she says. “Leaders are under a spotlight all the time, and so consistency and interest and openness are things that go a very long way. Smile. Lift people up.”

For example, when Schlichting eats in the cafeteria, she will sit with anyone.

“Unfortunately, I don’t get to the cafeteria as often as I should, but when I do go, I think everyone in the cafeteria must go out and tell everyone I do that. It’s always amazing to me how your reputation gets built, and it’s not by promoting it yourself. It’s just the fact that everyone around you observes.”

Her peers in the healthcare industry would probably make the observation that Schlichting is a forward-thinking, fearless leader. Schlichting herself merely says that she has less trepidation about taking risks.

“What I’ve found in life is that the most important things you do are probably the hardest, and I think that’s why a lot of people don’t do them. It’s hard sometimes to do the right thing because you’ve got to deal with the potential conflict, the risks that come with it. If I had felt that way when I came to Michigan, we probably wouldn’t have done half the things we’ve done because they weren’t easy. Sometimes the hardest things are the right things, but they’re not the things that everyone will gravitate to.”

When Schlichting decided it was time to retire, she brought in her handpicked successor, Wright Lassiter, for a two-year transition plan that is scheduled to end in December 2016. “I told my board when we started this process, ‘If you think I need to go sooner, just tell me.’ I want what’s best for the organization, that’s my Number One goal. I do not want this to be an abrupt, disruptive transition.”

Schlichting had met Lassiter on a U.S. News & World Report healthcare panel at a conference. She was so impressed by what he had to say on the panel that she went back to her hotel room and Googled him to learn more about him. Thus began a yearlong process in which the two executives and the Henry Ford board began to explore whether Lassiter might be a fit as the next CEO.

When Lassiter arrived from the Alameda Health System, where he had been the subject of a glowing cover story in Fast Company about the turnaround he and his team engineered at Alameda, Schlichting restructured the organizational chart so all the major divisions of the health systems now report to him.

“He has really jumped right in working with the senior leaders, and that is what’s really making this work,” she adds. “The other thing is that we’re in the midst of a lot of strategic change going on in our industry, so he is leading our major, strategic decisions moving forward.”

Lassiter’s arrival was far from the only succession plan moving forward at Henry Ford. Ed Chadwick also recently arrived as the new chief financial officer, and Schlichting installed Peggy Burns as the new senior vice president of development, in addition to several new chairpersons in the medical group.

But Schlichting says Lassiter’s leadership is making the transition to a new generation of executives much more seamless.

“I think some of our leaders had been saying to themselves, ‘I’m going to retire when Nancy goes,’ ” she says. “But now, I think they’re delaying that a bit because they really like working with Wright. So some of those transitions may now be staggered, and that’s to the benefit of the organization.”

Schlichting is moving on perhaps a few years earlier than the typical CEO – she’ll be 62 when she leaves – but says she knew it was time.

“I have been in either a CEO or COO role in very large hospitals or health systems for 32 years. I also happen to believe that, after about 10 years in any position, you’re not bringing the same level of creativity and energy that you did in the early years. It’s just human nature.”

At the same time, there are other interests she wants to pursue.

“I watched all of my extended family pass away before I was 16,” she says. “I’ve always known that life is short. I’ve put a lot of interests on the back burner for a long time and I want to move those up on my list of priorities.”

That would include more time with her partner Pam, playing the violin, gardening cooking, golf, and volunteer work.

“I sit at a lot of board tables and that’s great, but you don’t have the same rewards you have when you get closer to the action,” Schlichting says. “I want to do things that are more front-line, working with kids or working with people in need in our community so that I can feel that sense of connection.”

Beyond her leadership style, she says she hopes her legacy will include a reputation as a champion of diversity.

“Diversity enriches an organization,” she says. “All types of diversity have been shown to improve the performance of an organization, and the reason is obvious – you’ve got a very diverse workforce and when you have people at the top that represent the diversity in your world, everybody can look to someone and feel inspired by that.”

When Schlichting arrived in Detroit, only two of Henry Ford’s senior leaders were women. Today, there are 16, and that is one change she is proud of.

“That’s pretty cool, but it was not a strategy. It was about women looking at this organization and saying, ‘This is an enlightened place. This is where I want to be.’ ”

Schlichting is very involved as a civic leader in Detroit’s slow renaissance – she’s staying involved after her retirement – and says the city’s challenges have made her a better leader: “There were a lot of years where people looked at Detroit and said, ‘Why would I want to come there?’ If you didn’t create an environment where people loved working here and loved being part of the leadership team, we could not have succeeded as we have.”