Classic content from 2015 Top 25 Women in Healthcare: Maureen Bisognano from the IHI 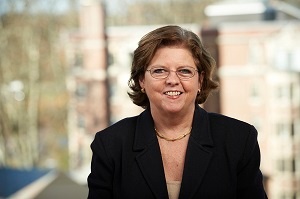 For the last 20 years, it’s been common for healthcare executives to look to the aviation industry for both inspiration and best practices in improving quality and safety. But Maureen Bisognano, CEO of the Institute for Healthcare Improvement, thinks perhaps we should look beyond the horizon for the next step.

“Twice this year, IHI has led a study tour down to NASA,” says Bisognano, who is retiring at the end of the year. “When you walk into NASA, there is a wall that tracks the journey of a space shuttle from when it comes onto the launch pad until it returns safely back home.”

That board also tracks every near-miss, equipment failure, employee injury and fatality that has happened across the shuttle program. And when teams see that wall, that gets them thinking about the depth of the details in such transparency.

“Nobody in healthcare understands safety that way,” she says. “If we make an analogy to healthcare, the left side of the map might answer questions like: Have we safely admitted patients into the hospital? Do we understand everything about that patient’s care and life outside the hospital, and have we brought that knowledge to the people who will be caring for that patient in the hospital?”

The other side of the board, Bisognano says, could provide responses to the question, “Have we safely guided this patient back into the community with access to medications, food and care?”
Looking at healthcare issues from a different angle is standard operating procedure at the IHI, which can usually be found on the cutting edge of health innovation. And, while it is true that the healthcare industry is adjusting to some of the biggest changes in its history under the Affordable Care Act, it’s Bisognano’s belief that the current disruptions are small compared to what’s coming down the pike.

“I think leadership is in the midst of a transition,” she says. “Leaders are going to be out in the community in ways they never were before. They’re going to begin to understand what it’s like to live in a particular neighborhood –how can their hospital or physician practice or ACO create health in that environment? They’re going to be looking way outside the walls of the organization. I think they’re going to be challenged by managing multi-professional teams, because there is no way that healthcare can be provided by a specific discipline anymore.”

Those are bold words, but Bisognano says that scenario is the end result of what it means to move “upstream” into a community to deliver care, a concept that has been around for years but is gaining new urgency as hospitals and health systems seek to prevent readmissions. And data is the key to that, Bisognano notes.

“The notion of ‘upstreamism’ means that people are going to be engaging with data and technology in ways that they never did before,” she says. “We need roles like ‘upstreamists’ and ‘extensivists.’ Upstreamists are people who say, ‘I will look at all of the population health data, and I will help us to think about what kinds of interventions will have the greatest impact on health by looking way upstream.’ ”

In a new project called One Hundred Million Healthier Lives, Bisognano and the IHI are having the chance to put a grand notion like that into practice by partnering with community organizations as well as a number of healthcare providers across the country.

“As an example, I’m seeing in some communities that the upstream data is telling the healthcare system that the biggest impact it could have is to work on getting homeless veterans into permanent housing,” she says. “In another community, we’re looking at the healthcare system partnering with others to work on the health of children under 5, because the children of that community are not healthy right now.

IHI’s sphere of interest extends far beyond North America. Bisognano and the IHI have long studied other nations’ healthcare systems, and she is quick to note that U.S. healthcare providers can get quite an education from other nations.

“I have the great fortune to be in a position to work in different countries all over the world. I see opportunities for us to learn from other countries – some low- and middle-income countries – and certainly from countries like Sweden and Denmark,” she says. “With the speed of change needed here, leaders who can look up and look out will be able to incorporate new models, new ways of thinking in a way that gets to the Triple Aim much more quickly.”

The Triple Aim, of course, is one of the IHI’s signature initiatives – improving the patient experience, improving population health, and lowering healthcare costs. It has been adopted by numerous hospitals and health systems. Through its conferences, research and open school (265,000 students in 73 countries), the IHI has multiplied its influence over the past two decades. Now, it is partnering this fall with the Harvard TH Chan School of Public Health to offer a free massive open online course (MOOC) that Bisognano hopes will attract more than 30,000 physicians and nurses in the next year.

Through all of these channels, Bisognano hopes the IHI will play no small role in preparing next-generation leaders. “I’m so encouraged with the students who are learning improvement. They see improvement as just a way of life, so they don’t feel the frustration. They also don’t tend to get as burned out because, when they see a problem, they have the tools to improve it.”