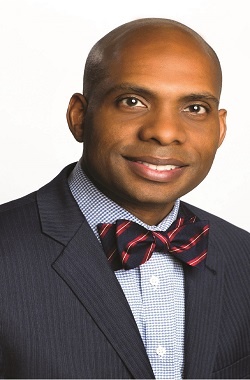 Trent Haywood has multiple titles after his name – an MD as well as a JD. But to find respect and cohesion among his leadership-team peers as he moved into a role as a physician executive, he says his biggest lesson was to check his degrees at the door.

“Someone gave me advice early on that, if you’re going to transition away from the bedside, you have to become comfortable no longer being called ‘Dr. Haywood’ but just ‘Trent,’ ” says the chief medical officer of the Blue Cross Blue Shield Association. “Being viewed as ‘the doctor’ has great social capital, but it prevents other executives from really getting to know you and sharing with you as a peer.”

But make no mistake – Haywood says he believes that more clinician executives are needed precisely because of their unique qualifications to bring the value to value-based care and to balance patients’ needs and concerns with healthcare finances.

“The business is evolving,” he says. “The model used to be ‘the suits and the scrubs.’ The suits did their thing, and the rest of us in scrubs did our thing. It was very siloed, and as long as you stayed on your side of the fence, it worked well.

“The model is changing. You have a new generation of clinicians who are going back and getting additional degrees. I think it’s going to continue to be the norm where you’re going to have many more clinicians in leadership roles.”

Haywood says his experience was easier than a lot of physician executives because he was able to wear both hats on a weekly basis for a seven-year period while he worked at the Centers for Medicare and Medicaid Services.

“On the weekends, all I was doing was focusing on individual patients as they came through the door of the ER. Then, during the week, I would be back at CMS flying all around the country trying to make a difference on a national level. My situation was unique; I was fortunate.”

Haywood’s own influences in leadership included his parents. His father Stanley, who recently passed away, had the longest tenure on the Lawton, Okla., city council in history. His mother Charlotte led the young people’s program for many years at the church the family attended.

“I learned early on from my mother that if you want maximum output, you have to take the time to invest in people,” he says. “You also have to delineate which people you are going to invest your time in.”

Haywood’s father coached him in athletics and impressed upon him the importance of teamwork over individual accolades. “If everyone showed up for practice, they were going to get into the ballgame, regardless of ability,” he remembers. “He put the onus on the team to think beyond ourselves and how we were going to approach the game in a team-based manner.”

In the same way, Haywood notes, payers and providers are going to need to work together as a team to help renovate the U.S. healthcare system. As someone who has worked as the deputy chief medical officer for the government (CMS), and chief medical officer for a major provider association (VHA) before coming to BCBSA, he thinks the convergence can’t happen soon enough.

“You’re going to see more and more collaboration across the board within a population-based framework,” Haywood says. “If I want to manage a population, then I need to understand more acutely where that population is going in terms of specialists and which ones are performing better for my population.”

But the talk between payers and providers needs to evolve beyond healthcare delivery, he says. Affordability is critical when many families live paycheck to paycheck with little savings, and that is reflected in BCBSA’s push for transparency in healthcare costs, Haywood adds.

“We don’t want families paying for waste in the system, and so that’s led to the issue of transparency. And the purpose is affordability – how can we make healthcare affordable for a family?”
Haywood has been using BCBSA’s new Community Health Management hub tool to take a deep dive into the data that affects healthcare consumers at the ZIP code level. For example, he recently dug into the statistics to show how something that many people take for granted – access to a car – affects population health, with many people in struggling neighborhoods unable to maintain nutritional health because they lack transportation.

Like his father, the city councilman, Haywood hopes to make a difference on the local level – by guiding BCBSA policy on a national scale.

“Most healthcare decisions happen outside the four walls of a clinical setting,” Haywood says. “I’m excited that we’re going to transition to more of a preventive healthcare model instead of a disease-based model.”