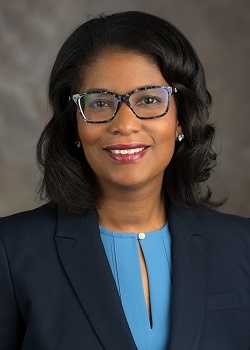 She paved the way for the ICD-10 project at Trinity Health in Michigan. She led the move to electronic health records. She mastered meaningful use. Now, she’s wrapping up bundled payments.

If you need a major project orchestrated correctly at Trinity Health, you inevitably turn to Tauana McDonald, senior vice president of clinical business operations for the Catholic health system.

“I know that I am not a clinician,” she says. “I identify the strategy needs and develop the plans. I lead the work from the corporate office so our clinicians don’t have to focus on operational issues and they can do the work they do best, which is taking care of patients.”

From the standpoint of organizational mission and personal satisfaction, it’s a role that McDonald says is a good fit for her.

“I think some of the projects I lead are making very positive change,” she adds. “That’s how I get to impact both the patients and the caregivers.”

McDonald came close to becoming a physician herself. Both of her mother’s sisters were nurses – one in the operating room and one in pediatrics. She remembers them both as being very nurturing people.

“People in the community looked to them during their most vulnerable times and there was something about that quality that really appealed to me,” she says.

So she completed four years of college as a pre-med, but the doubts about whether it was a good fit for her intensified as she sat down to apply to medical school.

“I called my parents and said, ‘I don’t think I want to be a doctor.’ And they said, ‘That’s fine. You just need to do something that is going to make you happy and contributes to society.’ ”

Giving back is a crucial part of McDonald’s ethics, a trait that she says was instilled by her parents. “In our household, we were always taught to serve because we were blessed and we should use our gifts and talent to help other people,” she says. “I thought healthcare was a great way to do that.”

After deciding to pursue a different future than medicine, she enrolled in the University of Michigan graduate school, where she earned a master’s in health administration. “From the first day in the first class, I knew I had landed in the right spot for me. That’s what got me started on my healthcare journey.”

Her path had several key stops along the way – IBM, where she was hired by future CEO Ginny Rometty; Deloitte, where she spent seven years doing strategy and operations consulting with healthcare organizations around the country; and motherhood – she stayed home for several years after her children were born.

The traveling that came with the Deloitte job was more than she wanted as she balanced family responsibilities, but her former employer Deloitte helped her find a good match at Trinity Health, where she gravitated to the system’s mission that echoed her mother’s advice that “to whom much is given, much is required.”

“A few days after I joined Trinity Health, I was in a meeting and we had to make a tough decision,” McDonald remembers. “The CEO leading the meeting said, ‘Can we bow our heads in prayer? Lord, let us put the patient first and ourselves last. Let us do the best thing for our patients.’ At that moment, I understood what it meant to be part of a faith-based organization. It really resonated with me. It still does.”

She says she also appreciates the diversity of the ministries that Trinity Health offers.

The diversity of the staff is of utmost importance to McDonald as well.

“Developing diverse leaders is really my passion, and I am intentional about it every day, looking at people in our organization who have a lot of talent that other people may not see right away,” she says.

“I believe that having a diverse workforce as well as a diverse leadership team helps us serve our patients better, because we’re bringing those same perspectives. We look like the patients we serve.”
As healthcare continues to evolve, the need for new ideas is critical, and a diversity of experiences can catalyze that, McDonald says.

“I take every opportunity that I can to help people with different perspectives share their voice and get a place at the table that allows them to do that.”

As the leader of so many key initiatives at a major American health system, McDonald is highly sought after as a mentor. Yet she says many of her key takeaways in leadership come not from another healthcare executive but from Florence Ferguson, her 102-year-old grandmother.

One key lesson Ferguson taught her repeatedly was, “You need to begin with the end in mind.”
“She said that a lot,” McDonald recalls. “She said that you need to think about where you want to end up because, as you’re going down that path, you need to be very thoughtful in order to get the results you want.”

Ferguson’s other key concept echoed the best leadership experts in her own less-fancy words.

“We always hear people talk about the shadow of the leader,” she says. “In her words, my grandmother would say, ‘Tauana, your actions are speaking so loudly that I cannot hear your words.’ If you speak things and your actions go in a different way, I don’t think you’re credible as a leader. So I try to have my actions support what I say – and I learned that from my grandmother.”