Innovation keeps George Brown, Legacy ahead of the curve 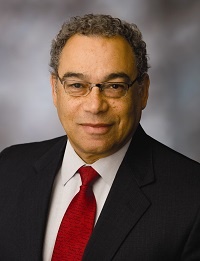 George Brown, the CEO of Legacy Health System in Portland, Ore., has had a long and distinguished career as a physician and leader, but his talents in innovation help him keep his organization on the industry’s leading edge.

From collaboration and affordable care to medical homes and information technology, Brown and his team have been unafraid to adapt and take risks, providing an example to the northwest region and the country at large.
Legacy joined with a number of organizations to form an integrated delivery system, Health Share of Oregon. It’s partnering on the OHSU Knight-Legacy HealthCancer Collaborative. In an era bursting with mergers and acquisitions, the path Brown has charted is intriguing.

“I have accepted the need to change from a completely competitive mindset to a collaborative mindset,” he says. “Competition doesn’t help the economics of healthcare – it divides communities.”

The Affordable Care Act has prompted soul-searching on the part of many executives, and Brown applauds the arrival of reform.

“I believe healthcare is too large of an issue for this country not to have a thoughtful and near-universal solution,” he says. “The Affordable Care Act is a step in the right direction.”

Although Brown has a sterling history in healthcare, it’s clear he doesn’t waste time looking back. He is especially proud to be on the board of Cover Oregon, despite some of the hits that the exchange took in the media for its early problems.

“We’ve enrolled 400,000 people,” he says. “We are moving in the direction to have affordable healthcare for all Oregonians.”

The ACA, he says, mirrors some of the measures Legacy has already been working on for some time, foremost of which is quality.

“The number one project we have been working on is how to make our organization more efficient,” he says, “and what we’re driving efficiency to mean is quality. We believe if you do things right, you don’t have to do them all over again, and that means it’s also less expensive.”


Brown also has led Legacy as an early adopter of the patient-centered medical home, an area in which some other health systems are just getting started.

“It’s important for me to say that all of our primary care clinics are Tier 3 certified patient-centered medical homes, and they’re doing very well,” he says. “Patient satisfaction scores are going up and we think we’re making an impact. In fact, we were recently recognized by the Oregon Health Leadership Council as being one of the top performers, so we’re quite proud of that.”

--Specialization is needed. “If you have a population that’s heavy with patients who have congestive heart failure, diabetes, hypertension and obesity, a lot of contact is required with patients.”

--The influx of Medicaid patients changes preconceived notions for providers and patients alike. “There are a significant number of people who have not had access to healthcare services. We are evaluating those people and their needs. Some of these people have never seen us before, so that’s going to be an area of revelation for us.”

--Mental health is a gaping need in the community. “We’re realizing that behavioral health, mental health and addiction issues are a lot more prevalent in the population than I think we realized, so we’re looking at how best to provide access to those services for our patients who are in medical homes.”

Legacy also earned kudos via a Stage 7 award from HIMSS last year. Brown has long been a proponent of how technology can improve care.

“I think the lesson we’ve learned – and we have to remind ourselves so we don’t get to learn it again – is that a lot of IT projects really are not IT projects. They are clinical projects that require IT expertise,” he says.
“If you get the clinicians involved early they can become champions of the initiative, where before there may have been some naysayers. It’s important to listen to the clinicians, particularly in their early experience and exposure with products, so that you can modify and incorporate those things that they think are essential.”

Listening to the clinicians, Brown adds, “has been the key element of our success.”

It surely helps that cause that Brown is a physician himself, a gastroenterologist and internist who rose to the rank of brigadier general in the U.S. Army and led several military healthcare installations, including Walter Reed Health Care System in Washington, D.C.

At one time, he found little interest among his colleagues for administrative work. Now, under reform, that has changed as clinicians see their input as essential to changing the industry.

“I think the old attitude of some of my colleagues was, ‘I just want to be a physician. I don’t want to be bothered with running an organization.’ Now, clinicians are more involved. They realize they need to help shape the future of healthcare if they want to see things change in a way that’s commensurate with their beliefs. You shouldn’t be passive about change.”

Working hard to achieve change, he says, is an attitude he inherited from his parents, who saw him become the first family member to graduate high school and were unwavering in their support of Brown and his two siblings, seeing education as the door to opportunity.

“They would tell me, ‘You have the ability. If you apply yourself, you’ll be able to achieve whatever you want.’ “

It’s a lesson he’s applying at Legacy, facing the future with resolve.