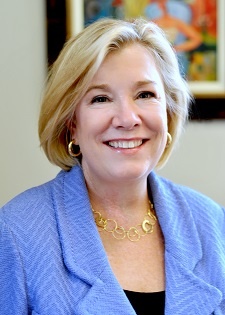 Sooner or later, anyone who spends time around Sue Schick is going to hear her philosophy for life: Pay it forward.

Throughout a long and successful career in healthcare, the chief growth officer for UnitedHealthcare Community and State has lived by that mantra, and its powerful, catalytic effect on her and those around her can be traced back to a pivotal experience she had as an undergrad at Randolph-Macon College in Ashland, Va.

At the end of her junior year, Schick saw no financial way possible to stay in school even though her grades put her at the top of her class. “It was the ‘80s, and we were in a recession,” she says. “I had been raising a lot of my own money for school, and my parents were doing all that they could to help, but my family was in a real financial pinch. My plan was to take two years off and work.”

She met with her adviser, who also was her economics professor, and informed him of her plan. “He was pretty distressed. He said, ‘You can’t leave.’ I said, ‘I can’t stay.’ I just couldn’t see any way around it.”

Three weeks later, Schick was back home and about to start work as an administrative assistant. She was in the kitchen and her mom handed her the mail, which included a letter from Randolph-Macon.

“I thought it was my separation letter from the college,” she remembers. “Instead, it was this letter saying I could stay because they found a scholarship for me. I started screaming at the top of my lungs.”

Schick went on to complete her senior year and spoke at her graduation as the valedictorian of her class. Two years ago, she spoke again as the guest of honor at the Randolph-Macon commencement, the very year her adviser, Ed Schmidt, was being honored by the school for his retirement after 48 years at the college. She shared the story of her scholarship and her vow to pay the school’s generosity forward, and got to hug Schmidt for his efforts to find a way for her to remain in school. “He didn’t remember the exact details of it,” she says. “I was one of many students he found a way to help.”

Today, Schick is a Randolph-Macon trustee and is chair of the student affairs committee.

“I work really closely with students,” she says. “I not only help students get scholarships, but I also help them find jobs and internships. I galvanize alumni to help serve and support students. I do this because some people helped me, and made a difference at a pivotal moment in my life when things could have gone a completely different way.”

Schick’s community involvement extends to a number of non-profit organizations, including the March of Dimes—her son was born without ears and hearing that was marred by blocked canals. The March of Dimes came alongside her family through a long process of corrective and reconstructive surgeries and, today, her son has near-normal hearing and ears. She has also committed much time and energy to the Susan G. Komen breast-cancer organization and the Juvenile Diabetes Research Foundation. On the business and governmental side, she served as Chair for the Pennsylvania Commission for Women, championing female leaders.

“I have a special focus on paying it forward to women in business, because there were role models and other businesswomen who helped me,” she says. “It’s especially an opportunity to help young women in their careers. I led that commission for the governor for three years. I know that not all women have the benefit of a supportive environment to get to the next level and add even more value in an organization.”

For her part, Schick says she has felt supported throughout her career at UnitedHealthcare, where she leads the growth of the Medicaid business.

“I was in commercial insurance for 25 years,” she says. “I was the CEO of our Pennsylvania market when the CEO above me, at Community and State, came to me and said, ‘What do you know about Medicaid?’ ”

Schick says she knew next to nothing about Medicaid, but learned a lot about it over the next three years alongside her regular duties.

“They gave me a chance to learn the business,” she says of her bosses at UnitedHealthcare. “I learned Medicaid, and then moved full-time into Medicaid. They took a chance on me. They gave me the opportunity to learn and then, when I was ready, gave me an expanded role.”

The learning curve has continued for her the last couple years – she was part of a select group of healthcare leaders chosen to participate in a new master’s program at Dartmouth College about the future of healthcare. The group included a payer leader (Schick), plus health-system executives, surgeons and health-policy experts learning from each other. She graduated last month with a master’s in healthcare delivery science.

“I’m a little old to be back in school,” she jokes, “but it was a great opportunity to participate with a cohort of senior leaders in healthcare. It brings together Dartmouth’s medical school, the engineering school and the business school. The program is at that intersection of system transformation and where healthcare delivery is going in the future.”

And the future, she says, is collaboration and innovation. “There’s no way that we at UnitedHealthcare could do this ourselves. We all need to work together as part of the system.”

The bonds she developed with her fellow leaders have been vital too, she adds.
“Just as important as the degree are the relationships we forged. We learned to walk in each other’s shoes. I left with a deeper understanding of what’s most important to these leaders in healthcare delivery on the provider side, and they are deepening their understanding of the payer side. That, I think, is transformative.”

Now that she’s back from the Ivy League, rest assured she’ll use any opportunity to pay forward that experience as well.

SIDEBAR: The lessons of mindfulness

When Sue Schick’s son was 7, he changed her outlook on business—and life—forever. Her son is an adult now, but Schick often shares the story to drive home a point larger than parental involvement.

Schick was home one night helping her son with his homework. In between problems, she’d pause to check emails and other work-related matters on her handheld device. At the end of the night—one that she thought was successful and productive—she asked her son what he he’d learned that evening. His answer wasn’t about arithmetic.

“I learned you love your Blackberry,” he said.

The answer, understandably, cut Schick to the quick, and changed her behavior. But she saw how much a relationship or even a conversation could be derailed by a lack of presence or mindfulness.

“To me, that lesson applies in other areas of my life as well. What happens when you have a busy mind when you are meeting with someone?” she says. “What I have found since then is that, if I am fully present and engaged, then my relationships are stronger, I’m more productive, and it reduces my stress. I think it leads to a more fulfilling life. Believe me, I am not declaring victory on this – we are all pulled in so many different directions.

“But, for me, it’s been a personal lesson that, when I am present, when I am focused on being here now, my life is better.”