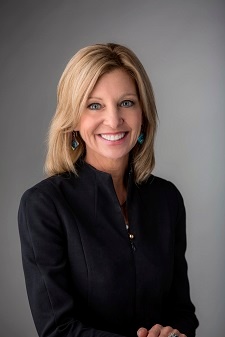 A commitment to diversity usually starts at the top of an organization, and Aetna President Karen Lynch is pleased that her employer is routinely recognized for the fact that its board is 40 percent female. But she knows there is more to be done.

“If you look at the studies that have been published, 73 percent of medical and health services managers in the U.S. are women, but only 4 percent of healthcare CEOs are women. So, clearly, we have some growth to move forward on,” she says.

But her thinking goes beyond gender diversity.

“When I think about diversity, it’s also about ethnic diversity. It’s about ‘Do we have diversity with veterans and LGBT and multigenerational, multicultural talent?’ I think there’s more to be done there as well.”

Make no mistake, though – Lynch is “quite proud” to be the first female president of Aetna.

“It’s such a great honor,” she says, but quickly adds, “As you can imagine, I didn’t get here by myself.”

Healthcare executives often talk about the importance of mentors and sponsors in their career. Lynch points to one from her childhood as a foundation for success in life – the aunt who raised Lynch and her three siblings after Lynch’s mom committed suicide. Lynch was 12 at the time.

“My aunt grew up in the Depression,” Lynch remembers. “Her parents came over from Poland. They were ailing, and she took care of them. She worked in a factory her entire life. Her husband passed away early on. She took care of her only son, and then she took on the responsibility of all four of us.”

Lynch says her aunt – and life itself – helped imbue her with resilience and a positive, constructive attitude. She says she met her father once, but does not regret his absence. “I think it’s made me the strong person I am today. I have a perspective of optimism, and the glass is always half-full.”

When Lynch was in her 20s, her aunt died from emphysema and breast and lung cancer, the result of heavy cigarette smoking. Nonetheless, her positive impact on Lynch had already been formed.

“My aunt was a very strong woman,” Lynch recalls. “She didn’t let anything get in her way. She instilled values in us like, ‘You can do anything that you set your mind to. And don’t let anyone tell you that you can’t do anything.’ ”

Her influence is evident in Lynch’s career arc. And it was, in part, her aunt’s illness that led her ultimately to a career in healthcare after a stint as an auditor for Ernst + Young.

“I remember sitting in her hospital room thinking, ‘I don’t know what questions to ask the doctors. I don’t know what to do to care for her,’ ” Lynch says. “I’ve made it my life mission now to bring the services to individuals so they can answer those questions when someone’s in need. Or, better yet, how do we keep people healthy in the first place?”

Lynch leads by example in that vein. She is a lifelong runner, although she has added spinning to her regimen to ease the pounding on her knees.

“If I’m going to run a healthcare company and advocate health, it’s important for me to remain healthy.”

Lynch says her training at Ernst + Young prepared her for leadership in two ways.

“One important lesson I learned was how to be an effective communicator with people at all levels of an organization,” she says. “When you’re an auditor, you have to talk with the most senior leaders of an organization as well as the front-line people. I had to learn quickly how to adapt my communication style.”

She also learned how to take opportunities as they emerged, she says.

“When you’re in public accounting, you’re thrust into situations that are uncomfortable and uncertain, and you have to quickly adapt and be flexible,” Lynch says. “I think those skills are equally important as a senior executive, because you never know what might come your way on any given day.”

Lynch and her organization have had to deal with a lot of uncertainty over the past year as the potential merger of Aetna and Humana fell through. The experience, however, hasn’t altered the company’s strategy, she says.

“Humana would have helped to accelerate our strategy, but that strategy remains the same – to be consumer-focused, transforming relationships with providers, focusing on the local community and building the next generation of talent,” she says.

Lynch says health insurers in general need to own their mistakes, but adds that payers don’t promote themselves enough in regard to the positive outcomes they quietly foster among their members. She recounts the story of one female college student she worked with who was anorexic. Lynch’s organization helped the young woman get into a treatment facility. She got help, returned to school and graduated from college. She signed up with Teach for America and has gone on to have a successful career.

“Those are the kinds of things we do that no one knows we do,” Lynch says.

“Maybe we’re too modest, but we need to tell our story because we are doing some phenomenal things across the nation.”

Aetna President Karen Lynch has always been quite active in charity work. That stems, in part, from her aunt who raised Lynch and her three siblings after their mother committed suicide.

“My aunt talked about and instilled in us the importance of giving back,” Lynch says today.

She says she sees the importance of that in her work every day.

“I have a passion for holistic healthcare and taking care of the whole person,” she says, “because with every chronic condition, many people are also suffering from a mental health condition. There are a lot of co-morbid diagnoses.”

Her mother informs that passion as well.

“Because my mom died by suicide, I believe very strongly in promoting mental health awareness and making sure people have access to the services that they need.”

Lynch found a strong partner in that endeavor in her husband Kevin, who founded the Quell Foundation two years ago to eradicate the stigma of mental health disorders.

“He gives scholarships to children who have been diagnosed with a mental health disorder, and also to kids who want to go to college to work in the field of psychiatry or psychology. And I personally fund the scholarship for kids who have lost a parent through suicide.”

This year, the Quell Foundation will provide $200,000 in scholarships to young people across the country. It’s one more motivation Lynch cites for doing what she does in her career.

“I get up every single morning,” she says, “trying to think about how we can have a positive impact on people’s lives and make this healthcare system better.”