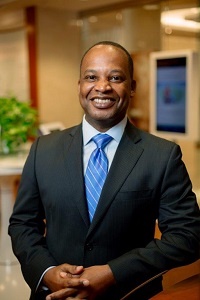 For many years, Mayo Clinic has been arguably the leading brand in patient care. But as it has evolved over the past two decades, Leon Clark has had a hand in the transformation process.

He’s now chairman of the research administration department, where he’s in charge of a $675 million operating budget. When he joined in 1997 after stints at Ameritech and American Express, he was a unit manager in accounting. Clark has had a steady rise at Mayo, and he remembers the smart evolution of a respected American institution.

“At that time, Mayo started to realize that, if it were sustain its full tripartite mission – practice, education and research – that it would need to diversify its activities and generate income from sources other than just practice,” he says.

Among Mayo’s purchases back then were a continuing care retirement community that included retirement homes and skilled nursing facilities, and a medical transport company. Clark joined Mayo to help the controller align and assess the diverse businesses.

That led to opportunities to become the operations director of Mayo’s health plan and third-party administration operation and the chance to run the OB-GYN clinical department at Mayo. Over the last decade, working in research at Mayo, he is helping to engineer another round of reinvention.

“We’ve started to reposition research at Mayo to be more aligned with a traditional R & D operation,” Clark says. “One of the challenges for academic medical centers is, how do we reposition research assets to drive transformational change in patient care? So what we have are scientists who, in many cases, work in university environments where the incentives are misaligned with the goals of the clinical practice.


“They’re rewarded based on grants and publications, and not necessarily on improvements in patient care or creating products and services that advance patient care and differentiate the operation.”

So what Clark and his team are doing is looking at Mayo Clinic through a completely different lens.

“My physician partner and I approach it from the perspective that Mayo Clinic is an integrated medical group practice first,” he says. “Our research and educational activities essentially underpin the practice and we are creating new capabilities that will contribute to the advancement of patient care and ultimately differentiate Mayo in the marketplace.”

That’s an important distinction in the post-Affordable Care Act era.

“As healthcare payment reform takes shape, there’s a greater likelihood that many patients who would benefit from care at Mayo would be locked out due to a narrowing of their network or for other reasons,” Clark says. “So what we have to do is create compelling and differentiating capabilities that will inspire people to come out of their network and seek care here because, in my view, they’re going to be better off in the long run.”

Clark is glad he himself came to Mayo himself almost 20 years ago. He credits former chief administrative officers Jeffrey Korsmo, now the CEO at Via Christi Health in Wichita, Kan., and recently retired Shirley Weis for being invaluable mentors in his leadership journey.

“Early on in my career, Jeff took an interest in me personally and wanted to make sure I had a successful career at Mayo,” he says. “But the other thing he did for me was to run interference for me when I needed it and to point out landmines when he knew I was on a path that would probably lead to me stepping on one. I found out after the fact that he had conversations with other leaders about me as well.”

That was crucial, he says, because diverse executives don’t always get second chances after they’ve made a mistake.

“All of us make mistakes in our careers,” he says. “In fact, I worry about people who don’t make mistakes because that means they’re not stretching enough to make a difference. Our industry needs folks who are innovative and who think transformationally. That might lead to making mistakes and the question is, how do we recover? If you’re a member of a minority group, historically, it’s been more difficult.”

Mayo is a big company ($8 billion) but a small community. It’s governed primarily by committee, and some of that work allows executives to expand their exposure to the entire organization and to get involved in things that aren’t necessarily part of their day-to-day purview. In that setting, relationship management is important, and Clark says that is one reason he has flourished there.

“People know me, and they know I’m well-intentioned,” he says. “So even if I step on a landmine, I tend to get a little bit of grace.”
He’s committed to passing that on.

“I think it’s an obligation of every leader to identify, coach and mentor the next generation of leaders, so I’ve been very intentional and active around that,” Clark says. “The demographics are changing – Mayo wants to serve every patient who benefits from our care, and those people are increasingly diverse. We want to give them the full Mayo experience. So how can we do that? We need to diversify our employees so we can better understand our patients and serve them better.”