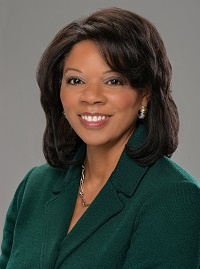 Patricia Maryland is talking about her role as chief operating officer for the Ascension Health system, but her message seemingly echoes the philosophy of her entire career: to grow, you must take risks.

“A major part of my role is leading through change,” she says. “The healthcare industry is going through tremendous transformation which requires leaders to challenge the way we deliver care.”

While Maryland has been honored with a number of awards during the four years she has served as COO and president of healthcare operations, she says the arduous role that preceded her promotion stretched her in ways that made her current success possible.

In 2007, Ascension asked her to leave St. Vincent Health in Indiana and move to Detroit to become the CEO of St. John Providence Health System and Ministry Market Leader for Michigan. The recession was just getting started; General Motors and Chrysler were restructuring their debt through bankruptcy. The economic pain that Detroit became famous for was just taking shape. As a result, St. John was hurting too.

“That was the most difficult time,” she says. “A number of our patients who were formerly employed ended up losing their insurance. We had to close hospitals. We had to consolidate programs and centralize services, and that was very risky. I had to lead through the change of reconfiguring the health system to create long-term sustainability given the external factors impacting the region.”

It was a difficult professional time. But on the personal side, Maryland says she was taking a risk there as well. “My daughter was going into senior year of high school; my son was going into eighth grade. My husband was transitioning his career as well. I knew I had to make sure my family was settled and comfortable back in Michigan after having been away for 4-1/2 years.”

Looking back, Maryland says the sizable risk proved to be more than worth it.

“When I took on the role in Michigan, it was larger and more complex than my previous role, and I was further challenged because it was during the worse of economic times. But I felt like I grew so much from a professional perspective. That role really provided me with the experience I needed to prepare for my current role as chief operating officer. If I didn’t have that kind of experience in leading through change, I don’t think I would be as effective in my role today.”

With success comes confidence, and Maryland is utilizing her voice as one of the most powerful healthcare executives in the country to take aim at healthcare disparities. Through a series of op-eds she’s written, she is candidly and forcefully encouraging healthcare organizations and patients to build on the momentum created by the Affordable Care Act and work toward equity of care.

“Part of what spurred this outreach is that the African-American community has really embraced the ACA,” she says. “I think we’ve made some great progress to expand healthcare access for many minority populations, but we know that coverage alone is not enough to eliminate healthcare disparities.”
To truly be effective, Maryland says, healthcare organizations need to help patients navigate health systems that can be difficult to utilize.

“We must mobilize the newly insured to connect them to preventive care,” she says. “It’s really important that we get them into the appropriate setting right from the beginning. If you can get into a system early enough, see a primary care physician on a routine basis, and comply with your medication requirements, you can have a better outcome.”

Maryland is seeing this prescription for good health lived out in her own family. As the oldest of eight children, she was the primary caregiver for her mother, who passed away from diabetes complications at an early age. Three of her siblings are genetically predisposed to diabetes as well, and they and Maryland are determined that their outcomes will be different.

“They’re working hard to stave off diabetes,” she says. “They’re exercising, following and complying with their medication regimen, and keeping their weight under control. They’re taking personal responsibility to do what they need to do to stay healthy.”

Not every family, of course, has an executive like Maryland to be its advocate. That’s one reason why Maryland also has long been a champion of diversity in the C-suite.

“We definitely need to address the pipeline issues of finding more individuals who represent the type of patient we are treating within our organization,” she says. “But it’s also making sure that those who are in leadership roles have the cultural competency to be able to manage populations to which they are providing care.”

Such leaders, though, need to have the attributes of servant leadership, Maryland adds.

“The nature of our work requires humility,” she says. “The fact that we are taking care of people at their most vulnerable state, when they are entrusting their lives to us, requires a different kind of leader.”

Maryland says her mentors Tony Tersigni (President and CEO of Ascension) and Bob Henkel (President and CEO of Ascension Health) have been her role models for servant leadership. In fact, it was Tersigni who identified her as a potential CEO leader within Ascension after observing her leadership style at DMC Sinai-Grace Hospital. Sinai-Grace also was where she’d unknowingly caught the attention of authors James Kouzes and Barry Posner, who ultimately featured her in their book “The Leadership Challenge” because of the work she did in transforming Sinai-Grace by challenging the process of how care is delivered. During this time, she was able to effectively garner the support from the Jewish community to assist in the transformation.

“You never know who’s paying attention to you,” Maryland says. “So always do your best – and do it with grace.”