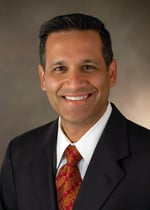 If Saad Ehtisham is something of an expert at change management, you might say it’s because those skills began to be honed at a young age.

After graduating high school in Pakistan, he began to look for a solid university for pre-med studies in the Dallas-Fort Worth area, where the majority of his mother’s family resides. (He’d been inspired to pursue a career in healthcare after helping to take care of his grandmother after she was diagnosed with ovarian cancer.) Ehtisham ultimately chose Baylor and, while he ultimately chose a route in nursing and healthcare administration instead of pursuing an MD, he cites that experience as a building block in his rapid rise through the healthcare industry.

“When you emigrate to a country at a young age, you tend to grow up a lot faster,” said Ehtisham, 42, the CEO of University Medical Center in Lebanon, Tenn., in a calm voice that sounds as Texan as a 10-gallon hat. “Going to Baylor was one of the best decisions I ever made. I was one of two students of Asian-Indian-Pakistani descent, and we were able to open up the university to greater diversity. It was a great atmosphere and I made some lifelong friends.”

He finished up with bachelor’s degrees in science and biology at Baylor, then continued his studies at Texas Woman’s University, where he earned bachelor of science degree in nursing, a master’s in business administration, and a master’s in health care administration. He took his degrees and started his medical career as a phlebotomist, drawing blood from patients. He became a nurse and worked his way up. He’s been a medical and surgical director, a chief nursing officer, a chief operating officer, and even served as an interim CEO in a career that has taken him all over the country, from Texas to New Mexico, Kentucky, Indiana and now the Nashville area. Ehtisham says the changes he’s experienced in his wide-ranging career have helped him better understand healthcare.

“One of the things I have learned in moving around the country is that healthcare is regionalized,” he says. “It really is different in different parts of the country. That’s helped me to become more diverse in my approach to healthcare.”

Having experience on the front lines as a nurse has helped him relate more easily to clinicians in his roles as an administrator, says Ehtisham, who has helped reduce turnover and increase patient and staff satisfaction at a number of his career stops.

“For me, clinical knowledge has been my greatest asset,” he says. “It’s helped me to get farther with physicians and get them more involved, usually with educating the front-line staff about different diseases. And it’s helped me to a better advocate for patients.”

Although success has come swiftly for him, he is quick to credit three mentors for shaping his leadership in key ways.

“Tim Charles was my first CEO, at Presbyterian Hospital (in Denton, Texas). I learned a lot from him—the way he interacted with physicians and his community involvement. I spent about 18 months with Dewey Greene in Albuquerque (when Greene was COO of Lovelace Health System). I would meet with him and barrage him with questions. He had a significant impact in preparing me for the CEO role.

“And Angela Marchi was my CEO at Albuquerque. She taught me how to stop being uptight and relate to employees in a way that would empower them to be more effective. She was very skilled at relationship building. Leadership is about relationships, and she taught me that if you can lead people, you’ll be much more successful than having to manage people.”

So Ehtisham has worked on his relationships, and on building his own leadership team as a CEO.

“To build a good team,” he says, “I look for diversity among the team members – not just ethnic diversity, but diversity in the way we approach things and the beliefs that we hold as a team. I like people who are comfortable with ambiguity, and I look for perseverance – anybody can lead through the easy times.”

In the rapidly changing world of healthcare, there’s a lot of ambiguity right now, but Ehtisham doesn’t see that as a barrier at all.

“I’m excited and energized by the uncertainty in healthcare right now. We’re ready to rise to the challenge.”