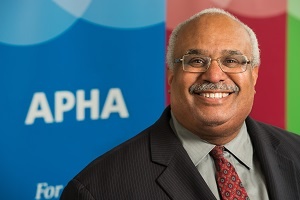 Georges Benjamin had a wonderful experience as a military physician, eventually rising to become chief of emergency medicine for Walter Reed Army Medical Center in Washington, D.C. But the diverse environment he experienced in those days bore little resemblance to what he encountered when he returned to life as a civilian.

“I was a beneficiary of a time when we had active affirmative action programs and had a significant number of minority students in my medical school classes as well as my residency,” he says. “There were many leaders who were part of a minority when I served in the military. When I went out to the private sector I noticed that I was far too often the only minority leader in the room. Thankfully, that’s begun to change.”

Today, as the executive director of the American Public Health Association, Benjamin is a strong advocate not only for the public health workers his organization represents, but also for diversity at every level of a company.
“In a country like ours, which has such a variety of experiences, the value in having a diverse workplace is that people bring in different ways of thinking,” he says. “We bring our experiences to the problem-solving process, and I think it helps create different solutions.”

In today’s political climate, he says, “we’re all kind of living in a type of echo chamber where we will only tune in and listen to people who agree with us. If you talk to yourself and answer your own questions, you’re less likely to get the most inclusive and innovative answers.”


“Increasingly, politics is playing a role in healthcare, for better or for worse,” he says. “Many of my colleagues just want to follow the science, and we should. But public health practice is both an art and a science that often uses the policy process to make broad system change. That makes it political. It’s increasingly difficult to appeal just to science when people are camped out in their ideology, so we also have to convince them on the merits of the evidence when it does not line up with what they believe. I tell students we should not be afraid to engage in the political process and to be an advocate. Recognize also, that sometimes you have to compromise and that negotiation is the most powerful tool in your toolkit.”

Benjamin is a leader well-versed in the nuances of the D.C. beltway, and a student of its history. During a recent sabbatical at Hunter College, where he stayed in the former home of President Franklin D. Roosevelt, he spent time collaborating on a coffee-table book that compiled political cartoons on healthcare during the past 100 years. “The Quest for Health Reform: A Satirical History,” was released in 2013.

“The thing that struck me was really how the rhetoric against health reform has not changed all that much,” he says. “Some of these arguments against it have been around for a long time and have mostly proven to be false.”

If consensus around broad health reform was hard to achieve over the past century, Benjamin bore witness to at least a temporary change in the aftermath of the 9/11 attacks for a more narrow reform of the public health system. At that time, Benjamin was the secretary of health for Maryland and was thrust into the national spotlight as his state and the nation grappled with deadly anthrax-laced letters.

Funding and support for public health reform was increased, and APHA, which Benjamin joined in 2002, was supportive of the Bush administration’s national public health preparedness program. But when the recession hit a few years later, budget cuts forced many of these public health programs to be curtailed, Benjamin says.

“The potential was there to build our public-health defense in a robust and organized manner, but then the recession came, and resources were withdrawn,” he says. “We have our first Middle Eastern Respiratory Syndrome (MERS) cases here in the U.S. right now. We’re always going to have new diseases that emerge; having an adequate health and public health system to address them is our challenge.”

Public health, Benjamin says, “is a leadership exercise.” As such, APHA works with the Department of Health and Human Services on the report for the nation’s Leading Health indicators, and partners with UnitedHealth Foundation on America’s Health Rankings. It’s also been in the forefront of warning of health risks associated with climate change, and the need for sophisticated health information technology. “We are also strong supporters of the Affordable Care Act,” he says.

While Benjamin believes the U.S. healthcare system has made progress in reducing readmissions and hospital-acquired infections, his military discipline shines through when he talks about what it will take for the industry to get where it needs to be.

“What we’d like to do,” he says, “is get a health system that is predictable and raises the bar over time.”