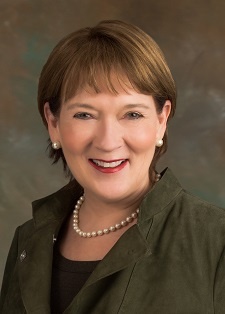 Roanoke, Virginia, used to be a train town. Railroads carved their tracks into the community on the edge of the Blue Ridge Mountains, and Roanoke’s manufacturing of steam locomotives helped make a name for the Norfolk & Western Railway. Even the first hospital came into existence because train workers needed care.

Like many such towns dependent on one industry that dot the mountains and the plains and the prairies around America, decay began to seep in when the trains started disappearing. But the Roanoke region, at least, has experienced a rebirth, and one of the people responsible for the city’s turnaround has had a close-up view all her life. That would be Nancy Howell Agee, the CEO of Carilion Clinic, a health system that has soared under her leadership and that has partnered with Virginia Tech for an economic rebound that’s pretty rare these days.

“Years ago, when I looked out of my office, I looked out at a brown field and a flood plain,” she says. “Now, I look at a thriving medical complex that includes a medical school and a research institute.”

The medical school, developed with Virginia Tech, has quickly become the most competitive in the country, with 4,500 applicants vying for 42 openings each year. The research institute, another joint project with Virginia Tech, didn’t even exist eight years ago, but now has more than $80 million in funded research and is getting ready for an expansion that will double its size.

“It wasn’t easy; it wasn’t cheap,” Agee says. “We have a fabulous board who have stood with us through some tough times. I think where we are now is an amazing place. We recruited great talent and offered new services to the community. A lot has changed and, in the next 10 years, I think we’ll see even more evolution of that change.”

The Carilion Health System became the Carilion Clinic in 2006 as leaders like Agee (the chief operating officer at the time) and then-CEO Ed Murphy saw the need to change its business model to safeguard its future. Agee says Murphy was a “visionary” in transforming the health system into a clinic. She sees herself as more of a “convener and collaborator,” but her fingerprints are all over the renovated system as well.

“It was definitely an audacious goal at the beginning,” she allows. “We adapted the plan for what worked for us. But, nothing worth having comes easy. There’s a saying around here that you can take risks without being reckless. And what we kept at the forefront was, ‘How can we pay attention to our mission of improving the health of those we serve?’ It’s not just words written down some place – it’s really how we believe and how we live.’”

Agee’s own life and career has had a similar arc of success. Her mom moved to Roanoke at the age of 16 from a coal mining town in Appalachia. She met another teenager and married him. A year later, Agee was born. They lived with Agee’s grandmother, who became a mentor to the young Agee.

Her interest in healthcare began at the Christmas before her 5th birthday, when her gifts included a nurse’s kit – including a cap – and a puppy. “You can imagine how much my little puppy got poked and prodded and bandaged,” she says with a laugh.
But her captivation with clinical work solidified at 15 when she was diagnosed with a bone tumor.

“I ended up having five surgeries on my knee and was immobilized for the better part of two years, either in a wheelchair or on crutches,” she remembers. “I had extraordinary care from my nurses, and from a wonderful physician, and I wanted to be a part of that. I wanted to be like them.”

Along the way to a storied career in healthcare – one that will see her become the chair of the American Hospital Association in 2018 – Agee became the first member of her family to graduate from high school and college.

“My family was proud of me,” Agee says. “But, having said that, they weren’t too certain what to do about education. And so, I chose to go to nursing school first because it was cheaper.”

She earned her bachelor’s degree from the University of Virginia and her master’s from Emory University, graduating from both with honors.

Agee was a nurse and a nursing leader for years at the health system. She says she loved every aspect of clinical care, but eventually wanted to find a way to make a wider impact.

“Being a clinician gives you almost instant gratification,” she says. “You assess what’s happening with the patient, you intervene and you see the results. In terms of my own evolution, I loved that part of healthcare. But eventually, I began to ask myself, ‘How do I make a difference to a broader degree?’ ”

That led her to administration, but she carries those nursing roots with her in her efforts to be a servant leader.

“I haven’t forgotten what it’s like to be at the bedside,” Agee notes. “I’m very visible – that’s important to me personally. I make rounds frequently. I go to all of our hospitals and facilities and talk to the staff. I also spend time with the patients to understand what’s happening with them.

“I want to make sure our caregivers are able to put our patients first and get their work done without any obstacles.”

It’s not just a business to Agee, who was born at the health system where she has spent her career.

“I love this community,” she says. “I love our mountains. I think we’re a strong community, yet we’re humble. We are resilient – and we love what we do. When I leave Carilion, I hope our people will believe I wanted us to have joy and meaning in our work and that we made a difference in the communities we serve. I believe we can do that.

“I found my place here.”

SIDEBAR: Leaving the white coat behind

When Nancy Howell Agee made the transition from nurse to executive, she continued to wear a white clinician’s coat – at least until she got some good (and blunt) advice from another executive.

“One of my mentors said to me, ‘You need to make a decision here. Are you an administrator or a clinician? The fact of the matter is, you’re confusing people.’ That was good advice.”

So, Agee ditched the lab coat. Now, at a time when many health systems have a tremendous need for clinicians to become organizational leaders as the industry continues the evolution to value-based care, she has a few helpful hints from her own journey: