2016 Top 25 Minority Executives in Healthcare: Wright Lassiter: In healthcare's new order, no time to bask in past success 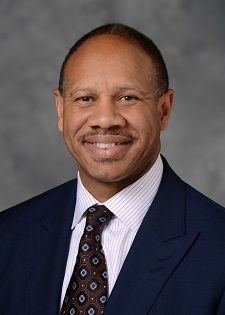 Wright Lassiter earned kudos as a CEO for engineering a huge turnaround of the troubled Alameda County Health System in California. Now, as he succeeds Nancy Schlichting as the leader of the prestigious and celebrated Henry Ford Health System in Michigan, you might think he could take a deep breath and relax a bit.

But that’s not how he sees it at all.

“As we look at the next 5 to 10 years, the way that quality and safety outcomes will be measured will be different,” he says. “We’re clearly moving even more from volume to value and risk, so I think the measures for success for Henry Ford in the future will be different than they have been for the last 10 or 15 years. I strongly believe that there is transformation required for our organization. We need to focus differently than we have in the past.”

Henry Ford won the coveted Malcolm Baldrige Award for quality in 2011, just one of a series of major accomplishments in its long history of stellar healthcare. Lassiter says one of his tasks in seeking to propel Ford to even greater heights is to remind his staff that past glories are no guarantee of future results.

“In a rapidly changing industry that may require different things of us, some days I worry about the complacency that could spring from so many years of excellence,” he says.
In particular, notes Lassiter, the future success of Henry Ford may not be as closely tied to the success of hospitals as it has been in the past.

“For the next five or 10 years, we’re going to have to leverage our large medical group, community medical staff and our insurance company much more effectively than we have in the past,” he says. “That will require both executional and cultural shifts to do even more of what we call integrated care and coverage, this notion of a more narrow network. And I think we’re perfectly situated to do that.”

To grow, Henry Ford is stretching out beyond its traditional home of Wayne, Macomb and Oakland counties, where it has provided care for the past century. In recent months, the health system has merged HealthPlus of Michigan, an insurance company 75 miles north of Detroit, into Health Alliance Plan and merged Allegiance Health, a system 90 miles west of Detroit, into the system. They’re also partnering on the Aldara Hospital and Medical Center, a hospital in Riyadh, Saudi Arabia, that will open later this year.

“These are the kinds of things we’ll be doing more of in the next five-plus years and that will require some transformation,” Lassiter says.

The announcement of Lassiter’s appointment as Schlichting’s successor struck some as unusual in the healthcare world simply because of the length of the handoff was two years. But, as Lassiter notes, there were some unusual circumstances.

“If it was a planned succession within the organization, two years is not necessarily that unusual,” he says. “But for us, the board thought it made sense because they had agreed on Nancy’s retirement date, and there was a lot of strategic work that they wanted to happen. The board was very clear that they wanted the new CEO to be fully engaged in the strategic work to reduce the risk of transition derailment or midstream change.”

When Lassiter came aboard, Schlichting quickly moved many of her key executives into a structure that reported to Lassiter. A number of those leaders, who had been contemplating their own retirements, warmed to Lassiter quickly and agreed to stick around as part of the transition team. And then came one of those unexpected circumstances that upped the ante – in June 2015, President Obama asked Schlichting to become the chairperson of the Commission on Care, which Congress established to find the best way to provide healthcare to military veterans.

“Nancy has acknowledged from day one that there was no way she could have served the nation in this role unless she and the Henry Ford board had agreed on an overlapping transition period,” Lassiter says. “The commission requires her to travel quite a bit, and that has actually accelerated the transition process as well.”

As Lassiter puts his own stamp on Henry Ford over the next decade, what will constitute success? He lists four items:

• HFHS will leverage its Baldrige award to become a high-reliability organization, one that can put its safety record up against the aviation and nuclear industries;

• It will be seen as the leading value-based healthcare system in the country;

• It will have developed a comprehensive statewide delivery system across Michigan – and beyond;

• It will be in the top 10 percent in metrics for employee engagement, physician engagement, customer service and safety scores.

“If I could look back 10 years and we had achieved these things, I’d say we had been wildly successful,” he says.