Nursing roots important to Judith Persichilli as she leads one of the largest U.S. health systems 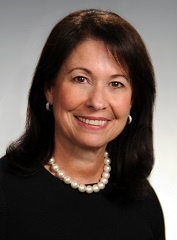 “When I wake up in the morning and look in the mirror, I see a nurse. I don’t necessarily see a healthcare executive.”

Nursing, Persichilli says, “has always been in my heart. It still is.” In fact, there is no shortage of executives on Modern Healthcare’s list of the Top 25 Women in Healthcare who have a background in nursing, including Persichilli.

Why do many nurses become successful healthcare executives? Persichilli says she thinks she knows.

“The education of nurses prepares them to be leaders,” she says. “You’re educated across the continuum; you understand the clinical process. You need strong relationship and communication skills as you’re dealing with physicians and other allied health professionals to promote a plan of care. At the same time, you are responsible in many instances for the communication with the family and significant others of the patient.”

While Persichilli leads an organization with $12.8 billion in operating revenue, she says healthcare workers at any level can make a significant difference in safety and quality in an era in which cost has become a driving concern.

The merger of CHE and Trinity created a huge, national Catholic health system. Previously, some other Catholic systems merged with secular counterparts, but Persichilli said that doesn’t mean they’ve abandoned their faith-based roots.

“The other systems that have merged may organize themselves differently, but they still have a faith orientation within their organization,” she says. “We have decided, based on the heritage and the tradition of the women religious who sponsored the healthcare entities that formed into a system, that our system would be Catholic. That doesn’t mean we won’t be welcoming to secular relationships that share our vision and values.”

In fact, prior to the merger, Persichilli was part of a team at CHE that made the difficult decision to sell Sisters of Mercy Hospital in Pittsburgh to the University of Pittsburgh Medical Center system. The move enabled CHE to create a foundation that enabled the sisters to continue their work with the homeless, a population that depended on the faith-based care in the community.

“One of the Trinity CHE values is courage, taking risks,” she explains. “Our founding congregations came to this country with 50 cents in their pockets to take care of people. Mercy was an excellent hospital, but UPMC was so large. The situation gave us an opportunity to say, what are the unmet needs? How can we continue this ministry that was started more than 100 years ago by the Sisters of Mercy?”

Persichilli says she believes similar crossroads are in the future of many communities.

“I think we’re going to be making more of these decisions in healthcare as you look at the community needs assessments that are required under healthcare reform.”

Reform, she adds, resonates with the work that faith-based systems have been doing for years.

“That’s who we are in Catholic healthcare. It’s not just CHE and Trinity – that’s who we are. Sometimes it means saying, there’s enough acute care. How can we creatively develop the structures and the financial foundation to meet the unmet need? It definitely pulls us into environments that perhaps other people don’t want to go into – the homeless, the vulnerable.”

While it’s a well-known fact that the U.S. spends more than any other country on healthcare with less than stellar results, Persichilli says the belt-tightening prevalent in the industry doesn’t have to make quality decline at all.
“I spent three weeks with Catholic Relief Services in Uganda visiting AIDS clinics and looking at their ‘hospitals,’ ” she says. “And I came back to the United States with the understanding that, even in a time of constraint, we live in an era of abundance. We have to figure out how to tap that strength, to do things better at a higher quality and a lower cost.”

One idea on how to do that? Better communication.

“We can do it. It’s there. It will take people in the provider sector and the payer sector to talk to one another, not past one another.”

Persichilli says industry executives need to know their numbers, but also understand that healthcare goes beyond costs.
“No matter what, you need to know that you’re doing really important work. You have the privilege of taking part in and changing people’s lives. When I was a nurse, I used to say, ‘Let’s all stand together and ask the question: ‘What difference did you make in the lives of your patients today?’ ”

That kind of attitude is especially important to people at the beginning of their healthcare careers, she adds.

Persichilli mentors a number of young female executives, but says she doesn’t get sucked into the “Lean In” debate.

“Work-life balance transcends gender when it comes to these executive positions,” she says. “I don’t ever step into somebody’s life and say, ‘You should do this or that.’ I always tell younger women, ‘It has to feel comfortable for you.’ And if it doesn’t feel comfortable for you and your career is going to be stalled as a result, understand the choices you make and be happy that at least you can make them.”

Today, she notes, stress about family isn’t confined to children – it could just as easily be about caring for one’s parents as part of the “sandwich generation.”

“If it’s too stressful and the children or your parents are not being taken care of the way you want, it’s not going to do anyone any good at work or at home. So understand who you are and what’s important to you. I don’t have any children, but I can tell you there’s nothing more important than raising good kids.

“I don’t have the answers here. I just know that, if you’re uncomfortable, own it and figure it out.”