From Brigham and Women’s to the NFL, Elizabeth Nabel looks to make an impact 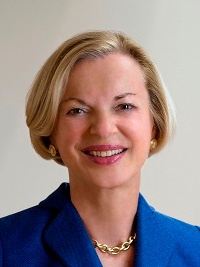 Elizabeth Nabel already was one of the nation’s premier cardiologists and researchers before she began leading the respected Brigham and Women’s Health Care system in Boston as president in 2010.

Yet even with such an impeccable pedigree, she has never been shy about taking risks. She took on a very visible role earlier this year as the first-ever chief health and medical advisor to the NFL. And when she was director of the government’s National Heart, Lung and Blood Institute, she worked with commercial industries – even Diet Coke – to spread the message that women were just as susceptible to heart issues as men.

“For me, these positions aren’t about visibility, but about the impact I can make,” Nabel says. “I feel it’s important to be a positive deviant, to have the courage to take risks and stand up for what you believe in, and not be afraid to be different or unpopular to get something done.”

While the NFL recently has had its share of controversy, she sees her role as an opportunity to make sports safer for people far beyond the professional level.

“The NFL has the opportunity to innovate in a way that will impact the health and safety of all athletes of all kinds, at all levels. I see this partnership as a great way to apply the knowledge acquired through the efforts of the NFL to the greater population of professional, amateur and recreational athletes.”

Before taking on her current position at Brigham and Women’s, Nabel served as director of the NHLBI from 2005 to 2009. It was there that she sought to drive change by launching the Red Dress Heart Truth campaign that still is going strong today.

The Red Dress, she says, “is a symbol of women and heart disease. Our goal was to raise awareness about heart disease in women to encourage them to take action and improve their heart health.”

Nabel lined up 150 partners, including 50 companies, to spread awareness. That included Diet Coke, which stamped the campaign on its cans and delivered a visibility that the government agency couldn’t have touched on its own.

“The strategy wasn’t without risk, and it earned me some harsh public criticism from detractors who felt it wasn’t the place of government to ally so closely with industry,” she says. “But I firmly believed it was the right thing to do, and looking back I consider these partnerships instrumental to The Heart Truth’s tremendous success.”

Due in part to the campaign, Nabel says heart disease awareness among women has risen to nearly 70 percent, compared to 34 percent just a decade ago.

As a cardiologist, Nabel’s concern for women’s heart health is natural, yet there is a deep-seated connection to an incident early in her career.

“One night, a 32-year-old woman arrived in the emergency room where I worked,” she says. “She described vague symptoms: aches, fatigue, a low-grade fever – nothing terribly specific. I ran some tests, didn’t find anything telling, and sent her home with Tylenol. Two days later she came back with a full-blown heart attack.”

Nabel was stunned – it contradicted her medical education that males were typically the only gender with heart issues.

“I had been trained by the best,” she continues, “and the best had taught me what the best had taught them: Heart disease was a man’s disease, and the primary symptom of heart attacks was chest pain, which my patient did not have. Thank goodness, that woman survived. The experience stayed with me, and I recognized the need to raise awareness about women’s heart health.”

If you called that incident a humbling experience, Nabel might agree – she sees no need for egos where patient care is concerned. In fact, she delivered a fascinating TED talk on the need for intellectual humility. From her vantage point at Brigham and Women’s, she stresses the need for those who work in healthcare to admit what they don’t yet know.

“An essential part of our mission at BWHC is to educate the next generation of healthcare providers,” she says. “Based on my experiences as a physician and researcher, I believe it’s vital for future healthcare providers to understand the importance of challenging the known and putting our ‘knowledge’ to the test.”

Admitting what you don’t know, she says, can actually be the starting point for breakthroughs.

“An oft-shunned word—ignorance—carries great importance when we consider it as the driver of scientific inquiry, and thus, the molder of new knowledge. Yet when myths—such as heart disease as a man’s disease—are widely believed to be facts, ignorance can kill. If we can help the next generation of care providers embrace the idea of humility, it will open the door for a wider range of new discoveries that will ultimately save lives.”

With value-based care becoming the holy grail in healthcare, discovery and innovation are sorely needed, Nabel says. Yet the pressures on academic medical centers are multiplying, from readmission penalties to cuts in NIH funding.

“In the context of healthcare’s new economic reality, innovation is more important than ever,” she says. “The answers to so many of the challenges we face in healthcare are so close – it is incumbent upon us to provide an environment where solutions can be cultivated and future innovations can flourish.”

Nabel hopes the game-changers that are within reach don’t get derailed by outside forces.
“We must help the policymakers and the public understand that investments in biomedical research drive improvements in patient care, which could ultimately reduce cost.”