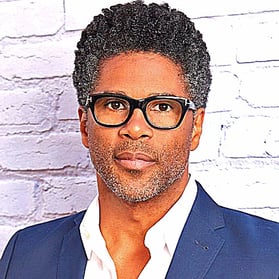 At a time when the healthcare industry is putting a premium on physician leadership, while seeking to address the disparities threatening value-based care, few executives are better positioned at the convergence of those streams than LaMar Hasbrouck.

Hasbrouck, who holds an MD and an MPH, is Senior Advisor for Strategy and Growth with the American Medical Association. He helps design and build the association’s equity portfolio, as well as cultivate corporate and private foundation relationships. He also guides the association’s chronic disease initiatives and heads efforts to improve internal team cohesion.

“I describe my job as a strategy whisperer,” he says. “I’m a fresh set of eyes to look at problems in healthcare and advise the Group VP where we should be putting our resources and what types of talent we should hire.”

But don’t be fooled; that fresh set of eyes has experienced a lot. Hasbrouck has worked at the local, state, federal and international level in healthcare. He worked at the Centers for Disease Control and Prevention for 11 years, first as a senior medical officer and later as the director of its work in Guyana, South America.  He was health commissioner of New York’s Ulster County, leader of the Illinois Department of Public Health and CEO of the National Association of County & City Health Officials.

That’s a rare perspective on some of healthcare’s most vexing issues. As such, he finds that the various entities don’t often work well together. That’s a challenge, because all hands are needed to try to solve the tenacious problems in healthcare.

“The local level works best with the state level, and the state works well with the federal, but the local and federal levels don’t work well together,” he says. “Then, at the global level, there tends to be a real disconnect in that the U.S. government tends to be one small layer in a very large pool with a lack of fluidity.”

Despite his distinguished track record, Hasbrouck is bold in championing solutions outside traditional thinking and is eager to bring his experience to bear on a wide range of issues. His international experience, from South America to Africa, also has molded his views.

“What I have learned in my travels is that innovation is essential for solving problems, yet it’s the simple things that you take for granted,” he says. “For instance, when I was in Uganda, we had problems getting medications into hard-to-reach areas. We considered flying the medicine in, but then we came up with the idea of a motorcycle tag team using dry ice to keep the medicine cool.

“We didn’t stop there. We trained some laypeople as health workers to address the most common side effects with the patients.”

Hasbrouck grew up in a world where preventive health didn’t exist. His family, led by a single mom, was, for a period, reliant on welfare to survive.

“It might be surprising to some people, but it was a very happy time,” he says. “We were materially poor, but spiritually and culturally rich. We were inventive in our play because we didn’t have material things. I didn’t know I was deprived, although there were clearly not a lot of male role models who were white-collar professionals.”

Yet it’s precisely that upbringing that gives Hasbrouck his mission in stamping out inequity in care.

“I have lived that experience and it gives me credibility,” he says. “I’m very driven by my personal narrative. I have chosen roles carefully by the impact I can have through my skills and competencies.