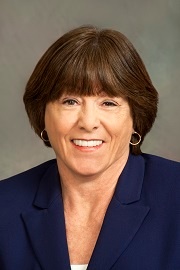 Karen Daley loved being a nurse, and she was a good one. But all that changed one day in 1998 when she was stuck by a needle while treating a patient. From that one needle stick, she contracted HIV and hepatitis C.

Her clinical nursing days were over. Over the next couple of years, she would undergo exhausting treatment regimens. But she was determined that the incident would not end her healthcare career.

“I learned how resilient I was physically and emotionally,” says Daley today, now president of the American Nurses Association and one of the 2013 Top 25 Women in Healthcare as chosen by Modern Healthcare. “It was a grueling time. I was constantly worried about fatigue, falling and exposing others to my blood, and I had little appetite because of the drugs. I looked sick.”

Yet while she underwent treatment, she plunged into advocacy, petitioning the U.S. Congress to change laws to reduce the odds that other nurses would have to face what she was going through. The laws were eventually changed to mandate use of safety-engineered sharps devices that could prevent similar injuries. Now, more than a decade later, compliance isn’t where it could or should be.

“We had to educate the healthcare system that these injuries and associated bloodborne pathogen exposures were preventable,” Daley explains. “Not only were they losing workers to these injuries, they were risking the goodwill of workers who learned over time that these were injuries that should not have occurred.”

In hospitals, she says, “prevention often is not seen as a viable strategy because it often costs money on the front end versus money you may or may not have to pay on the back end.”

While more safety needles are on the market and in greater use, Daley says the price drop that was promised by the medical device industry for the costlier devices as market penetration increased has not occurred. She also says federal enforcement of OSHA requirements is now a priority issue because “we know there are employers who are still not compliant with the requirements under the law.”

Beyond the institutional level and despite evidence that the overall number of these injuries has declined since the law was enacted, Daley says operating rooms remain a very high-risk area because surgeons control the kits and sharps that are used in each procedure, and are often resistant to changing their instruments or sharps devices. That has to change, she says. “Everyone’s health and safety is at risk with these injuries. It really is about what’s right across the board for a safer work environment.”

And medical device companies haven’t stopped making conventional or less effective early-generation safety needles and devices , nor have hospitals stopped buying them, she laments. “Today, despite the fact that the technology has improved significantly, we have some of the same devices on the market as when the law was passed.”

In the process of advocating around this issue, she says she’s learned that change is never simple, and that it’s important to get all stakeholders to the table, even congressional leaders who are feeling pressure from constituents and lobbying groups.

“For any movement, persistence is necessary,” she says. “It’s seeing the change through. We are still not where we need to be on needlestick injury prevention, so the need for persistence is another lesson learned.”

That’s a lesson she’s taken to heart in her own life, where she has gone back to the classroom numerous times to earn advanced degrees. Beyond her bachelor’s degree in nursing, she has earned a master’s in public health from Boston University School of Public Health, and a master’s in science and a PhD in nursing from Boston College.

To keep up with technological advances, the growing complexity of the healthcare system and patient healthcare needs, and to help combat the shortage of providers in healthcare, nurses need more education, she says.

“We need to make sure we’re helping nurses go back to school to advance their education. It’s an expensive proposition and that investment doesn’t always get recouped when they go back into the workforce,” Daley adds. “We also need to continue to grow the number of advanced practice registered nurses to provide care that is not going to be met by primary-care physician workforce, just based on numbers and geography.”

But shortages of all kinds are facing the practice of nursing, Daley says. There is an impending shortage of nurses, of nursing faculty, of chief nursing officers, and nursing-school deans – due to age, experienced nurses are retiring in large numbers. But the lack of adequate numbers of qualified nursing faculty is particularly vexing, she says.

“The faculty shortage represents a huge barrier for educating enough nurses. In fact, over the past several years, we’ve turned away more than 70,000 qualified applicants from nursing programs each year in this country because we don’t have enough faculty or clinical sites to accommodate them.”

Taken together, those numbers mean Daley will often be headed back to Capitol Hill to ask for more government funding to help to ease the crunch, exacerbated by the prospect of 2 to 3 million Baby Boomers aging into Medicare every year for the foreseeable future.

“We have to make sure the supply of care providers meets the demand,” she adds. “That care is largely going to be nursing care. So we have to feed the pipeline, and I’m concerned when I see so much reticence in Congress around the budget regardless of the issue, that we might not be able to keep up with what is going to be a very unusual shortage and critical demand over the next decade.”

Part of the issue, she suggests, is a lack of understanding of the value the nursing profession brings to patient care.
“What has to happen,” she adds, “is nurses need to be better understood as not simply compassionate caregivers, but as knowledgeable and skilled providers who impact patient outcomes and are licensed and accountable as part of their societal contract to assure patients of safe, quality care.”

She notes the case of two nurses in Texas’ Winkler County who anonymously reported a physician for unsafe practices (their allegations were proven to be true). But a law-enforcement official who was friends with the doctor uncovered the nurses’ identities and they were fired, prosecuted and indicted. Though they were later vindicated and won a settlement, the entire episode gives other nurses pause about speaking up, Daley says.

She is no less candid in describing the state of women in the C-suite, noting the paucity of female leaders in healthcare. “If I were to characterize it in one sentence, I would say we’re not doing very well at all in shattering the glass ceiling. We need to make a lot of progress to raze that ceiling.”

Daley hopes she can play a small role in changing that view of the ceiling.

“As I go out and speak with nurses and other leaders around the country, my job is to inspire and empower them to find their own voice, and to encourage them to take the risks that are necessary for making change. I want to help them continue in their own journey to be effective change agents within a larger system.”

Undaunted by the setback that ended her nursing career, Daley is taking her own advice to heart.