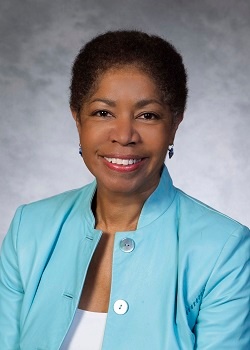 Ana Pujols McKee’s passion for quality and safety existed long before she joined The Joint Commission as executive vice president and chief medical officer. She previously served as the CMO and associate executive director of Penn Presbyterian Medical Center, in Philadelphia, and as a clinical associate professor of medicine at a teaching hospital in Philadelphia. Pujols McKee has championed for years the need for transparency and patient-centered care.

“I’ve had my own personal experience with injury as a patient, and I think what began to propel me in this area were some of the unfortunate patient injuries I had to deal with as a chief medical officer. Seeing up close how deep the injury extends to the patient and family is truly overwhelming,” she says.

The physicians and nurses who are involved in an incident when a patient is harmed suffer too, she is quick to add.

“What we don’t always talk about is what we now refer to as ‘the second victim,’ and that’s the clinician and staff that are injured as well. It’s a tough situation.”

From the time she was a child, she says, she knew she wanted to not only become a doctor but to run a large clinic – “all those altruistic dreams of taking care of people and making people well,” she says with a chuckle.

Pujols McKee’s prospects on the surface looked daunting – the world in which she grew up had some prejudicial obstacles blocking her way. She remembers constantly visiting a high school counselor to obtain information on college admission, only to have the woman continually tell her that she was busy or had no guidance for her.


“One day, I walked in on her as she was sitting in a circle with students who all were white, along with a gentleman in a suit,” she relates. “She jumped up from the chair and started to dismiss me when the gentleman said, ‘No, let her come in. Remember? I told you I was looking to recruit minority students.’ ”

It was, she says, a devastating experience, but not uncommon. “I have been told similar stories from many people of color. I’m not unique in any way. This is the way things were back then – and I believe they are, in some situations, not very changed.”

Besides being a driven student, Pujols McKee says, her parents were a strong cheering section. In her Puerto Rican family, her father was an electrician and her mother was a teacher. Together, they taught her the importance of perseverance as she grew up in the South Bronx.

She is hopeful that the changing face of The Joint Commission, which she joined in 2011, opens many doors for hospitals to achieve their full potential.

“When I got to The Joint Commission and I started to see how Dr. (Mark) Chassin, our president, was transforming our organization, I found it extremely exciting,” Pujols McKee says. “He has boldly said that accreditation is really the floor for transformation. We want to help organizations go above and beyond that.”

To that end, The Joint Commission enterprise has expanded its offerings by adding a new affiliate to its portfolio, the Center for Transforming Healthcare, to help health care organizations improve patient safety through the use of Robust Process Improvement™ tools including Lean Six Sigma and change management. The commission also partnered with the American College of Physician Executives to begin an academy for chief medical officers.

“One of the things I’m doing at The Joint Commission is leading a strategic initiative to support our physician leaders and provide them with the skills and resources that they need,” she says. “We recognize the need to support physician leaders as critical since, when we see a high-performing organization, we almost consistently see a high level of physician engagement.”

Pujols McKee’s own journey from clinician to C-suite executive has been typical of physician leaders, she says – one that included some growing pains.

“In today’s world, there’s so much transition that has to occur in an organization from the administrative to the clinical side,” she says. “I think we’re coming close to a time when it’s almost impossible to make that transition without being mentored or being part of a succession plan that includes spending time with finance, quality, and the operations team.”

Such transitions, she says, need to thoughtfully include more diverse leaders to improve healthcare and to more accurately represent the diverse communities they serve.

“The pipeline for future physician leaders has a fair number of women, but in terms of African-Americans and Latinos, the outlook is not very promising. There are some who believe that until we improve diversity in health care leadership, disparities in health care are not going to be fully addressed.”