CEO Transition: Hope and fail or fail to plan … how to avoid both

Any CEO transition, whether it’s an executive coming from outside the organization or an internal hire, will cause an impact on the performance of the organization. Hopefully, that impact will be positive, but nearly half of the time, that isn’t the case. A transition at this level affects the entire organization and hoping that it goes well is a plan that more often than not results in negative outcomes.

Any CEO transition, whether it’s an executive coming from outside the organization or an internal hire, will cause an impact on the performance of the organization. Hopefully, that impact will be positive, but nearly half of the time, that isn’t the case. A transition at this level affects the entire organization and hoping that it goes well is a plan that more often than not results in negative outcomes. 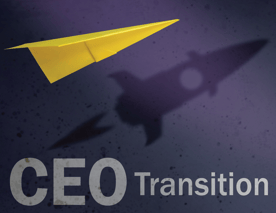 According to research from the CEB1, successful transitions result in a 90 percent higher likelihood that teams will meet their three-year performance goals. As an executive search firm, we partner with top healthcare organizations to discover and attract executive talent, as well as create a solid installation and transition plan to ensure success from the start.

When seeking a new CEO, organizations must focus on defining success far beyond the resume. Establishing a detailed set of filters and criteria for measuring talent allows the organization to gain a deeper understanding of candidates’ competencies and experiences and how those will or will not translate into future success. Viewing talent through a lens programmed with the organization’s culture, existing talent and structure, and business objectives and challenges, allows the true definition of the optimal role design to be established and matched with the ideal candidate.

Yet finding the right leader is only a small fraction of the battle for success. Research shows that one-third to one-half of CEOs will fail within the first 18 months2. The right person was selected based on all the crucial factors, so why are so many proven, talented executives failing to achieve success?

Experience shows that lack of transition planning is the likely culprit in most cases. It is not just one person transitioning, so why leave it up to chance? At a minimum, a transition at the CEO level is going to impact everyone on the board, the executive team, and the newly hired or internally promoted candidate stepping into the role. That’s a lot of transition, but it goes deeper than that. Everyone these leaders interact with, essentially the entire company, will experience the effects of this new transition.

Without a clear installation and transition plan, even successful CEOs take about six to eight months to gain any real traction and show strong results. Transition isn’t something that should be left to chance. It’s also not something that is learned while obtaining an MBA or on the job throughout one’s career.

During an interview with Brett Esrock, CEO – Hospital Division, Health First, while discussing the installation process, he said, “It’s been a springboard for our future success. A great springboard to a collaborative and cohesive team.”

Brett identified that he was a bit skeptical at the beginning of the process because he felt he was good at developing relationships and getting to know people. But after completing the installation process, he said, “It’s been inspiring for me to go through something like this. It’s taken my preconceived notions of what I can do on my own and shown me that I could use the help – having someone else come in and help identify where those potential pitfalls are and what we can do together to strengthen the bond.”

When transition is actively managed and planned success rates for CEOs and other executives increase dramatically, time to achieve results is reduced, culture immersion occurs sooner and more smoothly, and team effectiveness and cohesion are accelerated. In addition, conflict, which is a normal part of relationship development, is minimized and much less likely to impede team cohesiveness and overall company performance.

Throughout thousands of executive placements, we have seen the power of transition. This is why, at Furst Group, we’ve teamed up with our sister company, NuBrick Partners, to integrate installation and transition planning into the search process from the kickoff of the search through the first 90 days of the new CEO’s time with his/her new organization.