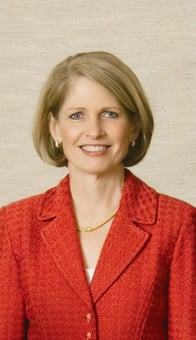 Marna Borgstrom was shopping for vegetables at a farmers’ market recently when an acquaintance approached her to say, “I just can’t thank you enough for the Smilow Cancer Hospital.”

It was a moment for the president and CEO of the Yale-New Haven Health System to reflect on why, ultimately, she was involved in healthcare. It didn’t matter that Yale-New Haven could boast that it was one of the largest systems in the country or that she’d enjoyed a productive career and interesting work that spanned more than three decades. It came down to one family finding the help it needed at a critical time. Just as all good healthcare does.

“Her kids went to school with my kids,” Borgstrom recalls. “And she was standing over the asparagus telling me about her husband’s diagnosis and the treatment. But she was really talking about all the talented people at Smilow who have been making a difference in their lives.”

Making a difference. That was the example she got from her parents, both of whom were first-generation Americans from families who did not have the benefit of much formal education. Borgstrom’s father became an ophthalmologist simply because the Army was doing manpower planning during World War II and they told him to go to medical school.

“When my dad was in private practice, house calls were de rigeur, and we’d all pile into the station wagon after church on Sundays and go to house calls to his patients, most of whom were older,” she says. “My mother would be home making a big Sunday lunch for us and extended family, and my dad’s older ethnically diverse patients would all feed us too, so we were rarely hungry when we got home.”

But what she and her siblings took away from those trips was much more than a full stomach.

“I think what we learned was that some of the real joys of healthcare are people and relationships. I have people who come up to me even now and say, ‘Your dad did my surgery.’ (He’s 90 years old and hasn’t performed an operation in 25 years.) And I don’t think that’s all that different from a lot of the people who work here now.”

Those warm memories help keep her going when faced with issues like the 2013 Connecticut legislature taking $550 million out of hospital-based reimbursement over a biannual budget, as it did the night before she paused to discuss her selection as one of the Top 25 Women in Healthcare as chosen by Modern Healthcare.

“They’re taking as much out of hospital reimbursement in 24 months as the entire industry in the state is taking under the sequester in 10 years,” she noted. “When you make dramatic cuts and you make them too fast, what you cause is more reactionary behavior than thoughtful behavior. Our system happens to be the largest provider system in the state, and we also are the largest providers of care to the medically indigent, so we got whacked disproportionately in this.”

No one in the industry, she adds, is arguing the contention that healthcare costs too much and that it is not always delivered in the appropriate way. Borgstrom says Yale-New Haven will weather the storm, but Connecticut healthcare as a whole may be damaged irreparably.

“I’ve said to members of the legislature here that there are some hospitals that will not make it with these cuts. And the irony is that some legislators think we will go in and buy them. We aren’t everybody’s savior. It’s a bad business strategy. So what the legislature may have to do in the next two years is go back and put money back in the budget to help the organizations that are really struggling. It just doesn’t make sense.”

Compounding the issue are an aging population and health disparities in the state.

“We have an older-than-average population, and we also have more people below the federal poverty level, ironically, in a very wealthy state, than most states in this country,” Borgstrom says. “A lot of what we see are diseases in the elderly that come from years and years of excess, and what we see in the younger populations are diseases and problems that come from socioeconomic disparities.

“Those aren’t going to change this year or next year just because somebody decided they were going to pay us less.”
The solutions that the healthcare industry is searching for under reform are pretty comparable from hospital to hospital, state to state, she adds.

“In this industry, I would contend that everybody has similar strategies,” Borgstrom says. “We’re all trying to get better on the value equation, we’re trying to build scale because it will help us with our business model, and we’re trying to integrate and align with other providers, most notably our physicians.”

The difference, she says, is in execution.

“The holy grail is in execution, and how people execute, I think, is based mostly on organizational values. And those have to be values that people lead by.”

In Yale-New Haven’s case, Borgstrom can rattle off those values pretty quickly: patient-centered, integrity, respect, being accountable, being compassionate. She learned them from her mentor, former CEO Joe Zaccagnino, who saw leadership qualities in her early on.

“He was somebody who gave me real and real-time feedback about what I was doing and how I was doing it. Sometimes, it really stung,” she allows. “But I knew he was not giving me the feedback for any other reason than to make me better at what I did and how I was perceived at doing it.”

Ultimately, she succeeded Zaccagnino as president and CEO when he retired in 2005. She’s been the architect of numerous major projects at Yale New Haven, including a children’s hospital, the cancer hospital and the recent acquisition of St. Raphael Hospital, a 520-bed facility that was teetering on the brink of bankruptcy. The Sisters of Charity of St. Elizabeth in charge of the hospital ultimately decided that Yale-New Haven was the best fit among St. Raphael’s suitors even though they gave up their Catholic affiliation in the process, a move that Borgstrom calls “one of the most courageous I’ve ever seen.”

Yet she is quick to deflect credit and to use self-deprecating humor to minimize it. “I’m the orchestra conductor,” she says. “I don’t do a whole lot. I just stand up in front and try to keep everybody playing and singing in harmony.”
One key, she says, is hiring good talent and then getting out of their way. Another is ensuring that the staff has a work-life balance that they are comfortable with, a prominent discussion especially among women leaders since the publication of “Lean In” by Sheryl Sandberg.

Borgstrom said she recently interviewed a candidate for an executive role and spent most of the time on that topic. The woman had become the breadwinner for her young family. She wondered if Yale-New Haven would be a good fit since she would have to move away from the support of extended family.

“What I said to her is, there’s no one answer to this, but I fundamentally believe that you cannot be a good executive if you aren’t happy and also able to manage your personal life. Because long after these jobs are gone, the people who will hopefully be in our lives will be that partner we’ve spent significant time with, our children and our extended family.

“If it’s the right person, the right job and the right organization – and both parties live up to their end of the bargain – I think you can have a successful and happy career and personal life. And happy is really important.”