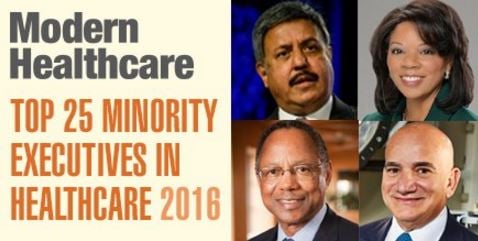 That's when Modern Healthcare will honor the Top 25 Minority Executives in Healthcare for 2016 at a gala in Chicago.

The awards, sponsored by Furst Group, honor 25 of the most powerful executives in the healthcare industry, in addition to 10 additional diverse leaders selected as People to Watch.

The Top 25 Minority Executives in Healthcare were announced in today's issue of Modern Healthcare. They are:

In addition, here are the 10 leaders chosen as People to Watch: