Profiles in Leadership: Jeffcoat at ease under reform’s pressures

A lot of the dialogue about healthcare reform is focused on cost, but Sally Jeffcoat, president and CEO of Saint Alphonsus Health System in Boise, Idaho, says she thinks there’s an equally important element that is being overshadowed.

“Health reform has really taken shape in the form of financing reform, but what we haven’t done yet is the care-delivery reform that’s required,” she says. “This gets to the heart of operational effectiveness: how are we going to reorganize care delivery that shifts patients to lower cost environments so that we can still deliver better quality than what we have today?”

To do that, she says, some of the responsibility needs to shift to the patients.

“A focus on prevention and wellness is where we need to reform the system because, right now, there really aren’t any incentives and reimbursement for that type of care,” Jeffcoat says. “It’s difficult to manage the transition unless we reward our providers to deliver that kind of care and we shift some of the risk for those expectations to those patients and populations that we are trying to serve.

“Healthy behaviors are really where we can address some of the problems of our healthcare system today.”

All of that speaks to change, and that is something that Jeffcoat is comfortable with herself. A native Texan whose father was an Army surgeon, she worked for many years in her home state and Arizona, rising to a CEO position in the Ascension system, before taking her current role with Trinity Health.

“I’ve had the blessing of working in organizations that have a strong management development program, but I would not have been able to advance if I wasn’t willing to take on different roles that I had to grow into, or move to different locations,” she says. “Working in different environments shapes you as a leader, because you learn from the positive and negative experiences and integrate them into your leadership style.”

Strategic vision tops the list when Jeffcoat lists the qualities that rising female executives need in today’s environment. But vision must work in tandem with operational effectiveness, she says.

“You need to have the ability to take strategic vision and operationalize it,” she says. “You need to be connecting the dots from strategy to effective implementation to be successful. I also think the ability to communicate vision – the what and the why – is important for a female executive. If you can’t get people wrapped around the why, it makes it more difficult to implement your vision.”

Jeffcoat is known for her dedication to quality and safety, traits that were shaped not only by her pivotal role in Ascension’s “Journey to Zero” program but also by her history as a nurse.

“It’s so important to never get too far away from the bedside or from direct patient care,” she says. “I probably get a lot of my satisfaction from being able to interface directly with the caregivers who are on the front lines. The other thing I derive from that is the teamwork it takes to produce the kind of high reliability that we are all trying to achieve as an organization.”

And a clinical background, she says, can sometimes help a female leader shine.

“It’s important to have the business skills necessary to perform a CEO role. But some of the characteristics of women leaders that bring a balance, such as compassion and collaboration, are very important, particularly in an industry in which 50 percent of the workforce is made up of clinical caregivers.” 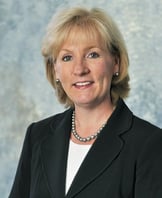